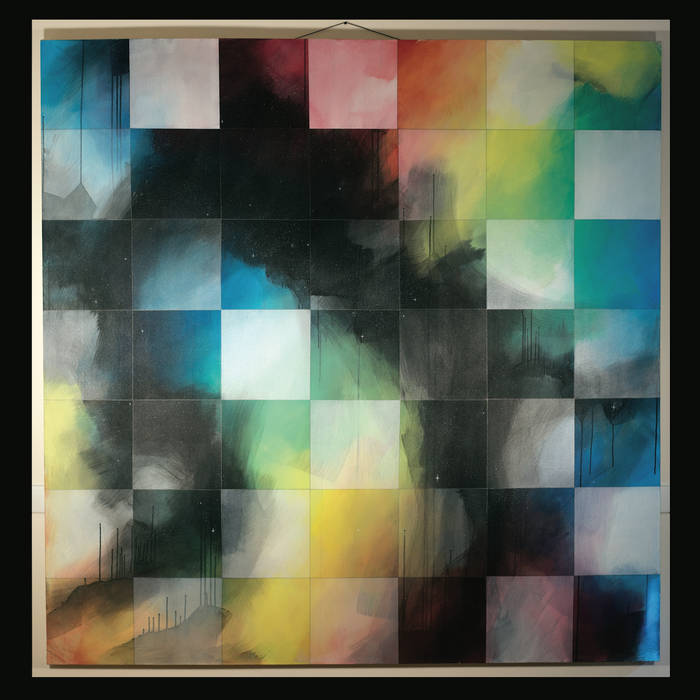 A Known Unknown attempts to sonically represent celestial events, thus treating all sounds as moments within physical boundaries. Because the subject matter which the sounds represent is always moving, no sound should ever be perceived as stagnated, or accented, and thus inevitably overlapping in a fluid manner. These parameters will result in sounds that react, morph, die, and birth new events. In homage to Alvin Lucier’s work Still and Moving Lines of Silence in Families of Hyperbolas, the “Known” sections in A Known Unknown deal mainly with periodic microtonal fluctuations highlighted in an harmonically stable and unchanging space. The microtonal fluctuations are executed through extremely slow sine tone glissandi, highlighting the minuscule cent deviations of the plucked piano strings and stuck crotale, and a slow ascending chromatic scale plucked on the piano or crotale against a “unison” gliss. The stable and sustained element in the “Known” sections is executed through a variety of arrangements including bowing crotales, an Ebow on the piano, and a sustained sine tone. Because the “Known” sections are through-composed without field recording or any “noise”, the silent backdrop amplifies the small sonic events providing a space for things like harmonic interaction (beating tones) and a larger perception of the microtonal landscape.

Although the recording has been edited, the score calls for the duration of A Known Unknown to be exactly 60 minutes, with a scored 1 minute of silence before and after the piece. The 5 sections, each of which are divided into the 2 “Unknown” and “Known” sub-sections, fluctuate with time and increase/decrease over the entire piece: Section 1: 4’/8’, Section 2: 5’/7’, Section 3: 6’/6’, Section 4: 7’/5’, Section 5: 8’/4’. The sub-sections maintain a consistent starting point and trajectory with the “Known” sections (1b, 2b, 3b, 4b, 5b) portraying microtonal “interactions with space-time” while the “Unknown” sections (1a, 2a, 3a, 4a, 5a) portray sonified representations of celestial event interactions. The form was chosen to balance and guide the listener’s ear through a long duration while still giving the sense of return to a concept or sound texture.

The noise elements are highlighted with the field recording that is added to the “Unknown” sections of the recording (and granular synthesis that is added to the live performance). In addition, noise is suggested seven times as a musical realization of the interaction between the celestial events Nebula, Pulsar, Quasar, Stellar Nursery, Constellation, Impact Event, and Planet.

One of the ways A Known Unknown directs the performers to the idea of play is through the “Unknown” sections of the piece (1a, 2a, 3a, 4a, 5a). In these sections, the players are asked to sonically represent celestial events through a guided improvisation of suggested actions and conceptual embodiments. The 10 celestial events given in the score as options for sonification are: Gravity, Moon, Planet, Star, Stellar Nursery, Pulsar, Quasar, Constellation, Nebula, and Impact Event. For each event the score provides a formal definition, an abstract of the main musical idea, and 3 or more suggestions of how to execute the musical idea and also guide the player in forming the main conceptual idea if they wish to try “something else entirely...” which is always given as an option. For example, let’s look at the celestial event entitled “Stellar Nursery,” in which players are also encouraged to play non-traditional instruments (i.e. Musician 2 plays percussion sounds such as stones, buckets, bowls, water, grains, plastic bags, superballs, etc.) as well as to play their instruments in a non-traditional manner.

Largely dealing with celestial events, A Known Unknown is the most directly astronomy-themed piece I have composed thus far and is inspired largely by the 2016 - 2018 news events and images of the NASA/ESA Philae lander from Rosetta mission landing on the 67P/Churyumov- Gerasimenko comet. In addition, visual imagery of the mission is included during a live performance situation: “A video projector showing slowed images of space (e.g. Philae lander, Rosetta spacecraft, 67P/Churyumov– Gerasimenko comet, etc.)” are to be projected.

Other than the more up-front indeterminate elements of the guided improvisation, there are 2 more elements of indeterminacy depending upon if the event is a live performance or recording situation. If a studio recording is being made, Musician 3 is directed to capture a 60’ field recording during the exact time of the recording session which is then mixed into the “Unknown” sections during post-production. In a live performance situation, Musician 3 is directed to add granular synthesis “in real-time via a live-miking of the room and/or specific instruments and objects.”

The performer-composer relationship is arranged in that performers have a great deal of open/guided instruction for improvisation, highlighted with the option “or something else entirely...” at the end of each celestial event suggestion. I have also allowed the instrumentation for Musician 2 (percussion) to be varied or added to by the performer and their tastes.

Composed by Jordan Dykstra in the summer of 2016.

Mixed and mastered by Assaf Gidron during summer and autumn 2017 in New York City, New York.

Cover art is the painting "Astrology" by artist Jesse Durost - www.jessedurost.com - and was photographed by Shelli Weiler.

Bandcamp Daily  your guide to the world of Bandcamp